Should You Use #Hashtags for Your Business 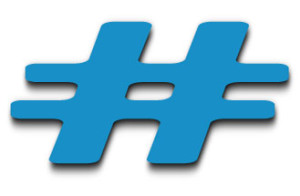 Recently, we’ve had a lot of clients asking “what is the whole hashtag business all about?” With so many different hashtags and uses for them, we feel it would be beneficial to explain what hashtags are, how to use them and when they best apply.

Hashtags start with the pound symbol: # followed by your series of letter or words you would like to use.

The first hashtag was created by Chris Messina, @MrMessina, in 2007 in this tweet:

The founder of Twitter, Evan Williams, initially thought that Messina’s hashtag idea would be short lived because it was ‘too technical’ for the average user. However, as we can see today Messina’s concept is still very much used in everyday life. Hashtags are used at events, in groups, and creates a circle of people with common interests or topics.

For example, say that you going to the Dodgers Opening Day game with your friend and you want to tell everyone that you’re going. Lucky for you, the Dodgers have a hashtag created by their marketing team just for this purpose: #OpeningDayLA . By using this hashtag when you post about the event you are connecting your tweet with the thousands of other fans who have also used this hashtag in their tweet. By entering this hashtag into the search bar of Twitter or in the Explore section on Instagram, you can see who else is talking about Opening Day and connect with other fans.

You’ve seen plenty of posts that have ten, even twenty hashtags attached making the hashtags even longer than the initial caption. While these users are correctly using hashtags, they are not using best practices with hashtags. We feel it’s best to use 1-3 hashtags for each tweet or post and some tweets don’t require any hashtags at all. While using several hashtags can be effective in gaining new followers, it isn’t the best approach for gaining engaging and loyal followers.

If you are asking yourself “should I use this hashtag for my business?” then consider these two variables before publishing.

1. Does this hashtag take ownership of my brand?

For instance, if your brand has the slogan “Just Do It” attached to it, then using the hashtag #JustDoIt supports your marketing campaign and your brand message. But this should only be done with a brand name or one slogan. Keep it focused.

2. Will anyone in my target demo search for this hashtag and see value upon finding my content?

Sure, people search hashtags like #cool and #fun all the time. However, this is not a very focused use of a hashtag. Let’s say you owned a clothing store on the popular Venice Beach street Abbot Kinney, you would want to tag #AbbotKinney in your posts so people looking to learn more about the shopping in that area could see your content.

One last tip: it’s especially important to keep hashtags short, specific, spell checked, and civil. These rules are important for all account but especially business accounts.

Nowadays there is lot of undesirable circumstance which force a person to take medicaments. There are variant problems when you have to buy drugs from the WEB. Certain drugs are ordinarily used to treat numerous types of bacteria, such as bronchitis and infections of the nose. Generally, if you have lost the appeal to a particular partner, medicines like Levitra to improve potency is unlikely to help him back. Levitra is a treatment used to treat varied problems. What do you think about https://isviagraoverthecounter.com/over-the-counter-muscle-relaxer.html? You may have heard about Numerous pharmacies describe it as . Probably you already heard about the matter. Sex drive diseases are so ordinarily a product of what you've experienced that there is some to that "headache" saying after all. There are side effects possible with any type of drug. Generally remedies like Levitra has come under serious note, special regarding its cooperation with some medicaments. Your physician may occasionally change your dose to check you get perfect results.